You would think it takes sheer genius, or a miracle, or a huge revelation, to truly cause a shift in someone’s life, right?  Not so much.  Try a simple, single act of giving, and see what that does – not only for the person receiving your gift, but for you – when you take part in authentic giving.

Since I live in downtown Ft. Lauderdale, I am constantly driving by the park on Broward, just east of Andrews, where countless homeless people live.  When I moved here, I began cooking double batches of food, and as I cooked for myself, I would package the 2nd batch, and drop it off as I drove by, with plasticware, in disposable containers.  (recyclable – for sure!) The first time I dropped off my food, I marveled at the impact it had on me.  Driving down Broward, with tears rolling down my face, I felt a new gratitude that I had never felt before.  Not grateful for the big things, but for the small things.  That I had my own food, and water, and knew every day where I was sleeping, and that it would be warm and dry.  It broke my heart that so many others had so much less.

At Purim, we give Shaloach Manot – Food Baskets – for the needy.  With 62 children in my Hebrew School program, I wanted to organize an act of giving. Not an act of giving where we just dropped food off at a truck.  Yeah, that’s good too, but – I wanted my kids to know what homeless people looked like.  I wanted them to see that they were real people, people who might have just lost out on chances, and this is where they ended up, for now.  I explained that sometimes, people choose this life, and while I wanted them to give to someone who had less than them, I did not want them to look at them with pity.  Just look at them as people who have less, and no way to get what we have, and know that you are doing something good when you share it with them.

I organized a food drive.  Asked every family to donate some food for baskets, to organize the baskets, and drive to downtown together, to drop them off.  I told them we probably wouldn’t stay there, just long enough to share – and leave.  Several families asked if I had press coverage.  “No”, I replied – I didn’t want any.  This wasn’t about me, nor was it about my kids, but it was about simply – giving.  Nobody would know we were coming.  No organizers were there to make sure it all worked out, but something deep down inside told me that the ultimate Organizer, Blessed be He, was going to take care of it all.

I got nervous.  What if our giving caused a riot?  What if we didn’t have enough to go around and something bad happened?  What if my innocent children who I brought to Ft. Lauderdale with their families experienced a good plan gone bad?  Not today.  It wasn’t going to happen.  The Organizer was at work, making sure it was all good.

And so – we met at Dunkin Donuts, in the parking lot.  I was overwhelmed at the number of families who showed up, brought amazing food, and even some extra friends to help out.  Within minutes, my kids and my families put together 42 bags of food, and we kept some as leftovers, because I actually ran out of bags.  (We’re doing this again on April 10th!)  I wanted to take pictures, document the process, but I managed to catch a few quick shots, and they were all ready to go! 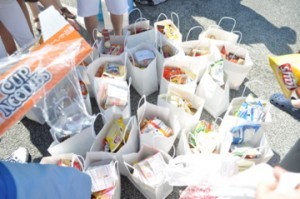 We got in our cars, caravaned down 595, and like a parade of cars, pulled in to the spaces that bordered the park.  I jumped out of my car, and was just looking at all the homeless people, and was almost speechless.  I was overcome with emotion, and didn’t even know how to start.  Thankfully, a young man, who was sitting on a blanket came to me.  I explained that I was a teacher, and in these cars behind me were my students and parents.  That we just celebrated Purim, where we were thankful for our abundance, and wanted to show our gratitude by sharing our food with them.  I told them we might not have enough, and asked them please kindly to share and make sure everyone got something. 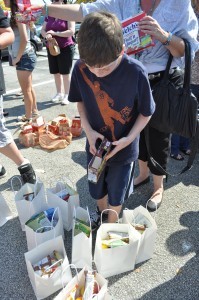 Suddenly, every person in the park was standing around us – respectfully – eagerly – waiting to see what we were doing there.  They heard my explanation, and I could immediately feel their incredible gratitude for just showing up for them at this moment.  I then invited my kids to get out of their cars, and carry a bag to each person that was standing on the sidewalk, and suddenly, all of the people in the park began thanking my children profusely.  Again – I was overwhelmed. 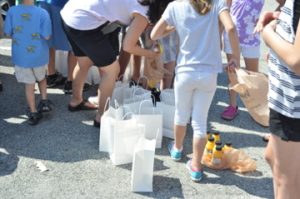 A nice looking man – actually he was fairly clean cut, and seemed to me to be “recently displaced” spoke up.  He told my kids that they might not realize it, but that it only takes one person’s small act of kindness to change the world.  Maybe not the whole word, but HIS whole world was changed today, and I suspect, so were many others. But you know what’s funny?  I think for the people receiving the food, their day was changed.  But for those of us who brought the food?  That’s whose lives were changed the most. 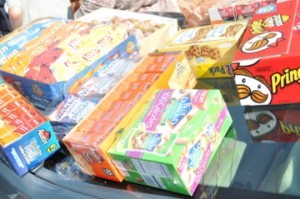 Can you imagine the feeling of watching one of your precious students, clutching his mother, as he sobbed in her shirt, in despair for the unfortunate people whose day he just brightened?  Well, not only was his world changed today, but mine was changed even more.  To know that I just watched so many of my precious students, and their parents take part in true, direct giving – from their hearts, and from their wallets, was one of the most life changing experiences I have ever had.

We will be doing this again on April 10th, and if my friend Elizabeth has her way, this is going to become a monthly event – because truly – people are starving every day – right here at home.  Not just on Thanksgiving or Yom Kippur, but every day – and because we can – we should make giving a daily event. Thank you to all who shared in today’s Mitzvah.  I am truly grateful for having you in my life.