Who do you think was the hero of Passover?

I bet you anything you’ll say Moses, right off the bat, right?

Well, it’s important to know the story of Passover and dig a little deeper, so I’m going to share my personal thoughts on a great Passover hero, Nachshon.

I’m not saying Moses wasn’t a hero – he was! He conquered his fears, despite feeling insecure as a result of his speech impediment, and he absolutely believed he was not worthy of the responsibility God had bestowed upon him. But, he had a huge advantage – he had God on his side, and his brother Aaron, supporting and encouraging all the way.

Nachshon was not so lucky. As the Israelites approached the Sea of Reeds, and Pharoah’s army was already in hot pursuit, intending to recapture the released slave community, he was left with a choice – a momentary decision that would change history.

Nachshon had a debilitating fear of water. As he looked ahead, and all around, he saw only water, fear, and was sure he would drown.

As he looked back, he saw Pharoah’s army, closing in on the Israelites. Surely, he could not go back. He knew in that moment that going backwards not only also meant death, but regression and surrender to evil.

So, he chose forward. He put those fears aside, and stuck his toe into the water. Consumed even more with fear, he continued, staring fear in the face, and moving forward.

Just at the moment the water was about to overtake Nachshon, the miracle occurred. Moses lifted his staff unto the heavens. In concert with the Divine, at that very moment the waters parted, and the Israelites had a clear path to freedom.

So – who was the hero? What brought upon us this great miracle? Did Moses have supernatural power? Well, kind of – he had God leading the way. But my hero of the day is Nachshon. An ordinary guy, using his human power to conquer fear, look forward, and move through the fear. Making it to the other side, I am inspired by this story, year after year. 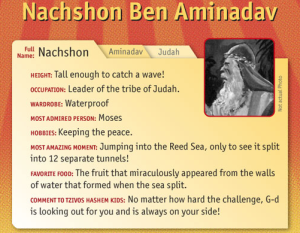 Not a day goes by that I’m not afraid of something. But I always keep the story of Nachshon nearby to remind me that fear will always be what stops me – if I allow it.

This Passover, what are you afraid of, that you are willing to stare in the face and move through?

Wishing you a holiday of strength and perseverance, like those who came before us.