Woke up this morning and was checking out the Jewish Wedding Network’s recent activity, as I’m really hoping their site does well!

I came across a Chuppah photo gallery, and wow – some of these are amazing.

In my opinion, Seth & Dana’s chuppah still takes the first place award of weddings I have officiated, but some of these are just simply incredible.  My sincere kudos for the artists who imagined, and created them!

I often have so many brides who run into chuppa challenges, whether they be financial or creative, and this gallery shows that something as simple as a scarf above your heads, or as elaborate as a chuppa made of lights, can be a beautiful and “kosher” addition to your wedding.  It doesn’t have to be about the flowers.

If you’re looking for simple or elegant chuppah ideas, you’ll find them here!

I admit, I’m a huge fan of Destination Weddings, but Seth and Dana’s Jewish wedding ceremony was the perfect example of why we should still have big, beautiful events right here at home.

So, things were off to a great start from the minute I heard from Dana, because she emailed me and told me that her fiance, Seth, was the son of a business associate/friend of mine, and they wanted to talk about me doing their wedding.  Seth’s Mom – Ellen, is the only other Whirling Dirvish I have ever met, other than Lara Mayer, from Max’s Bar Mitzvah.  I’m not quite sure what a whirling dirvish is, but I know that Ellen’s picture is under it, in the Webster’s Dictionary.  Truly.

Seth isn’t much different from his Mom.  He is SUCH a character.  And Dana is the perfect match for him.  From the first moment we met, we all shared a great connection, and I just couldn’t help but fall in love with this perfect combination of wit, humor, and sarcasm, and that made getting to know them SO much of an adventure.  I knew, when we met for the last time at Starbucks, that I was really going to miss my Thursday evening coffee sessions, because I always felt myself smiling for hours after leaving one of our meetings.  They are just so damned cute.  SO CUTE.  Together.  A perfect match, a match made in heaven, yes…beshert…..

Dana and Seth are so close, they almost share the same DNA.  I don’t think I ever witnessed an awkward moment, or a single answer that was any different from what the other answered.  They should totally be on the Newlywed Game – if it was still around. 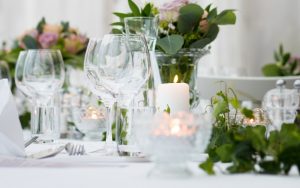 Photo by Evelina Friman on Unsplash

But, the best part of Dana and Seth, was their Jewish wedding ceremony.  From the minute I got to Woodfield Country Club, you could feel the love and excitement in the air.  The florists were putting together the chuppa and the walkway, and I knew from that first look that this was going to be an exquisite setting, and it was.

We held the Ketubah signing prior to the Jewish wedding ceremonyceremony, and their ketubah was so beautiful.  It was a special moment for their immediate family, and for Dana and Seth, as well.  Within a few minutes, we were off to line up for the processional!

Perhaps my ultimate favorite part of the wedding ceremony was the processional.  Dana and Seth picked the BEST music for their processional, and I began walking out to Jack Johnson’s “Better Together”.  A very popular pick these days, it’s also the most played song on my IPOD, so I was really psyched to be walking to my favorite song in the whole world.  Then, she chose a song by Van Morrison (I think it was Into the Mystic….will have to verify that) but it was such a pretty song.  Then, my ultimate favorite song played for her processional (which has now taken over JJ’s Better Together as #1 Ipod song) by Marc Cohn, called “True Companion”.  OMG.  What an amazing song.  I was beaming at her walking down the aisle, because the mood was just so happy, and exuberant, and I was so excited to be waiting for both Seth and Dana at the chuppa!

The wedding ceremony was beautiful – Dana wasn’t sure if she wanted to circle Seth for the Seven Blessings or not, and at the last minute, she chose to have me wrap the Tallit around them, but it was just as beautiful.

They exchanged their rings in the Jewish traditional way, first on the right index finger, and then moving them over to their own left ring fingers.  I concluded the Jewish wedding ceremony with the Birkat Cohanim, Julie Silver’s version, and on to the breaking of the glass and the pronouncement. They were married.  And beaming at each other.  And I was sad – that it was over.

Dana and Seth – I just think you two are so much fun, and I can’t believe time flew by us so quickly.  I’m happy you live right around the corner, because I really hope you’ll still make time for some coffee-Thursdays.  In the meantime, have a great time on that incredible honeymoon you are going on and thanks for the awesome memories.  Love u both!

Want to create your own “dream come true wedding”? Contact Cantor Debbi today to see how you can co-create the event of your dreams.