I was happy to read an article today, about brides continuing to book destination weddings in the Caribbean.  I have been sooooo tired of hearing all the bad economic news lately, that I have almost stopped listening to the news, or reading the paper.  But, today I stumbled upon good news, and it was so exciting, especially because it directly relates to what I do.  I’ve considered myself so fortunate this year, that while everyone has been lamenting about their economic conditions, times are good for me.  I have felt that my business is fairly recession-proof, as long as you provide value for what you do, and I think I work very hard at keeping my prices reasonable, especially for the service that I offer.

I have often said that the destination weddings I officiate in the Caribbean and Mexico are so worthwhile, and way more fun than a 4 hour soiree that costs a fortune, just because it has the word “wedding” attached to it!  When my clients get married at an all inclusive resort in the islands, their guests get to enjoy a 3 day (or longer!) vacation together, rather than a 4 hour hustle-bustle with mediocre filet and lobster tail, and a dried out potato. 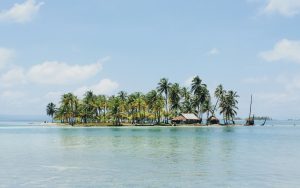 The families get the most amazing bonding time, and the experience can’t be beat.  The wedding planners I have worked with are proven professionals, and the whole experience brings the best memories I could ever imagine.  My clients are relaxed, their families and friends are having FUN, and best of all – they’re spending less than half of what they would spend in the U.S.

I’m so happy to hear that my brides in 2009 and 2010 are still going to be booking destination weddings in the Caribbean and Mexico, and that I might be fortunate enough to continue sharing the most amazing experiences with them and their families for the coming years ahead.  I can’t recommend the experience highly enough – and if you are just beginning to think about where you can take your family for your special day – be sure to ask me, because I’ve really had a world of experience the last couple of years.

Looking forward to discussing performing your destination wedding in the Caribbean, Mexico, South America, and beyond!  What a great job I have!  See you in the islands!

I just returned last night from my 4 day trip to the Riu Palace in Playa del Carmen, Mexico, where Dan and Rita were married in the most beautiful ceremony (if I do say so, myself). What an amazing group of people this was! I must admit, I was a bit unsure if I would be able to bond with the guests and families, as I usually am able to do so easily. Thursday night, Rita told me they had shut down La Bodega, the Brazilian restaurant on the premises, for her family to have dinner. As I arrived at the restaurant, not having met anyone yet, I approached a group of 50+ people, who I assumed were her guests and family. The only problem was – everyone was speaking Russian! I was a little apprehensive about who I would talk to, and how I could connect with these families whose culture seemed so different from mine.

But, almost immediately, my fears were put to rest. I naturally gravitated to Mila and Vladimir, Rita’s Aunt & Uncle. They made me feel so comfortable, and they were SO interesting to talk to. Next, Dan’s Mom and Dad came and introduced themselves to me, and again, I felt so welcomed. The group went out right after dinner, but since I was tired, I retreated to my room, intending to wake early for the next morning. Friday morning gave me an opportunity to relax, and then we met for the rehearsal of the ceremony. That was when I had the chance to meet Dan and Rita’s wedding party and immediate family, and it was beginning to feel more familiar. I was immediately taken by how friendly and attentive Rita was. She was not only breathtakingly beautiful on the outside, she is even more beautiful inside. From the first minute, she was so concerned that I was having a good time, and you could really tell it was so genuine.

Friday afternoon I had been sitting in the lobby working on some emails, and found myself sitting next to Esther, Rita’s cousin. She was so lovely and lively, and we just found ourselves talking for hours. She invited me to join her for dinner with her mom and Rita’s mother, and that was when Faina became my favorite person in the group. Faina is Esther’s mom, and she is one of the most lovely people I have ever known. She became my dinner and breakfast partner, and once we became friends, the rest of the weekend was so easy, and suddenly, I found myself falling for this group of people, because they truly were some of the most special people I have met in quite a while.

I was so taken with how all of these people came from a country that gave them nothing, monetarily. Each and every one of them had an individual story, of leaving Russia, with nothing more than a few dollars in their pockets, not even knowing where they would end up. But, one after another, they found their way to America, and boy did they overcome insurmountable odds. As I was introduced to the family members, one was a doctor, and another was a doctor, and so on. Dan’s dad fixed typewriters when he came to the U.S., and he grew that into a successful office machine business. Vladimir is a successful Engineer, and even the women put themselves through school and found jobs, and they all became successful. 90 family members who came from the most modest beginnings were celebrating, drinking LOTS of Vodka, and toasting “God Bless America” – along with a few l’chayim’s and other Russian toasts I really couldn’t master, but a great time was being had by all!

We were beginning to fear the weather, though. It rained the entire day on Friday, and by Saturday morning, it didn’t look any better. But Rita’s mom prayed extra hard to Rita’s father, who had passed away many years ago, to watch over his daughter and keep the rain away, and her prayers came true. The sun came out in the afternoon, and the wedding was amazing. Even I had a hard time keeping dry eyes through the whole ceremony. And now I can say, it was one of the best weddings I have ever done. I know I say that after every one, but this one was so special, yet I can’t really elaborate why I feel that way. Perhaps it was the people. Perhaps it was Mexico. I’m not really sure, but something very magical happened when 90 Russians converged on Mexico. It was a marriage in more than 1 way, for sure.

Sunday morning, Faina and I had our last breakfast together. We sat in the sun at the beach, and got ready to say our goodbyes. I said goodbye to Rita and Dan, Yelena (Rita’s sister), Faina, Esther, and all of my other newfound Russian friends. I will never forget this experience. It made me a richer person, and certainly not because of the financial gain. I am a better person for having met this group of people. They made me remember that my problems are insignificant, compared to the challenges they have met in life. They reminded me that even though people are different, we can still put aside our differences, and find ways of communicating in loving ways, across cultures. They reminded me it is fun to learn about and meet people from other cultures, that there is a whole big world out there, aside from my own.

They opened the world up to me, and I’m so happy to have met Russia in Mexico. Dan and Rita – I wish you the best life has to offer, because you deserve it. You are an amazingly beautiful couple, and I thank you for everything you brought to my life. Make sure you let me know when the first baby is coming!