I just read Rabbi Lev Ba’esh’s post over on www.Interfaithfamily.com, one of my most favorite Interfaith relationship resources, and was touched by how similar our experiences and positions are on performing Interfaith wedding ceremonies.

Anyone who reads my story on my website knows that when I married Wayne, my Christian ex-husband, the list of available Rabbis to officiate a Jewish-Interfaith wedding was a very short one, at best.  I can’t remember his name, nor do I have a good memory of him at all.  Looking back, he struck me as someone who would marry a cat to a dog, for a check.  Uninspiring, to say the least, but he certainly did not help the Jewish factor in my marriage, as my husband formed a strong impression about him, and related that impression to the faith, overall.  Bad mistake.

I can’t even begin to recount the numerous run-ins we had about how judgmental, critical, conditional, and exclusionary the Jewish faith was, which couldn’t be farther from the truth – but you know as well as I do, that perception IS 100% of our reality.  Sad.

Today, I, like Rabbi Lev, feel I have a completely different impact on the Interfaith families I touch by my Jewish-Interfaith wedding ceremonies. 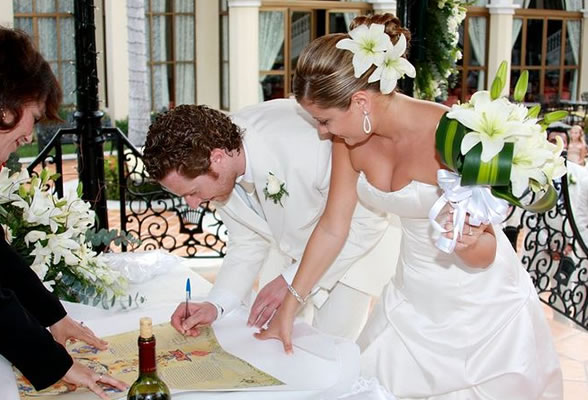 Also, like him, I am more frequently approached by the Jewish guests than the Non-Jews, with comments about how much I taught them about their own faith.  As Jews, we learn to do and say very certain things, but never learn why.  We don’t learn the meaning in our lives, we don’t learn why.  Our Jewish traditions are beautiful.  The fundamental message of our religion is “Do the right thing”.  Read the words to the V’Ahavta – the prayer that follows the Shema, the most important prayer a Jew can utter.  The words tell us to love God, to speak of Him, remember Him, and take him with us in our hearts every day.  If we do that, we will surely make decisions that prove that we were made in his image.  We are beautiful people, with a rich, touching history, and being Jewish is a magnificent thing.  Unfortunately, too many people aren’t shown the beauty of being Jewish.

My Interfaith wedding ceremonies include lessons about why we do what we do, and what the meaning is in our lives.  I always try to relate a Torah portion or lesson from the Torah in my wedding ceremonies, so everyone can take a piece of God home with them.  In this way, nobody feels excluded, nobody feels alienated, and even the Jews learn just a little more about our beautiful faith than they knew before.

The end result, hopefully, is that everyone who attended that Jewish-Interfaith wedding, or even Bar Mitzvah or Bat Mitzvah feels the beauty that eminates from Jewish lessons.  When an Interfaith couple has decided to marry, it is not up to the wedding officiant to judge that decision, but it is our responsibility to strongly and proudly represent our faith.  It is up to us to hold our heads up and take a stand for why this Interfaith family should NOT turn their backs on Judaism.  It is up to us to put being Jewish in their hands, however we can make that happen.  We should NOT try to force anything on anyone, but I just don’t see how strongly representing something so beautiful could possibly be looked down upon.  If we believe that God brings man and woman together, what gives Rabbis the right to second-guess his decision?

Jewish, done right, is a magnificent thing.  Judaism is the cornerstone of my life.  It is my road map to God.  It is my light that guides me, teaches me right from wrong, and holds me up when all else fails me.  Why wouldn’t I help someone else have that feeling?  We cannot be afraid as Jews.  We cannot run away.  We couldn’t run away in the past, and we must not run away today.  We must stand up proudly, and teach our Interfaith couples that Judaism is beautiful, and can be the light that guides us all.

Thanks, Lev.  You reminded me again how amazing it is that we have the opportunity to do what we do.  I am so grateful.

Want to create your own “dream come true wedding”? Contact Cantor Debbi today to see how you can co-create the event of your dreams.

I just returned last night from my 4 day trip to the Riu Palace in Playa del Carmen, Mexico, where Dan and Rita were married in the most beautiful ceremony (if I do say so, myself). What an amazing group of people this was! I must admit, I was a bit unsure if I would be able to bond with the guests and families, as I usually am able to do so easily. Thursday night, Rita told me they had shut down La Bodega, the Brazilian restaurant on the premises, for her family to have dinner. As I arrived at the restaurant, not having met anyone yet, I approached a group of 50+ people, who I assumed were her guests and family. The only problem was – everyone was speaking Russian! I was a little apprehensive about who I would talk to, and how I could connect with these families whose culture seemed so different from mine.

But, almost immediately, my fears were put to rest. I naturally gravitated to Mila and Vladimir, Rita’s Aunt & Uncle. They made me feel so comfortable, and they were SO interesting to talk to. Next, Dan’s Mom and Dad came and introduced themselves to me, and again, I felt so welcomed. The group went out right after dinner, but since I was tired, I retreated to my room, intending to wake early for the next morning. Friday morning gave me an opportunity to relax, and then we met for the rehearsal of the ceremony. That was when I had the chance to meet Dan and Rita’s wedding party and immediate family, and it was beginning to feel more familiar. I was immediately taken by how friendly and attentive Rita was. She was not only breathtakingly beautiful on the outside, she is even more beautiful inside. From the first minute, she was so concerned that I was having a good time, and you could really tell it was so genuine.

Friday afternoon I had been sitting in the lobby working on some emails, and found myself sitting next to Esther, Rita’s cousin. She was so lovely and lively, and we just found ourselves talking for hours. She invited me to join her for dinner with her mom and Rita’s mother, and that was when Faina became my favorite person in the group. Faina is Esther’s mom, and she is one of the most lovely people I have ever known. She became my dinner and breakfast partner, and once we became friends, the rest of the weekend was so easy, and suddenly, I found myself falling for this group of people, because they truly were some of the most special people I have met in quite a while.

I was so taken with how all of these people came from a country that gave them nothing, monetarily. Each and every one of them had an individual story, of leaving Russia, with nothing more than a few dollars in their pockets, not even knowing where they would end up. But, one after another, they found their way to America, and boy did they overcome insurmountable odds. As I was introduced to the family members, one was a doctor, and another was a doctor, and so on. Dan’s dad fixed typewriters when he came to the U.S., and he grew that into a successful office machine business. Vladimir is a successful Engineer, and even the women put themselves through school and found jobs, and they all became successful. 90 family members who came from the most modest beginnings were celebrating, drinking LOTS of Vodka, and toasting “God Bless America” – along with a few l’chayim’s and other Russian toasts I really couldn’t master, but a great time was being had by all!

We were beginning to fear the weather, though. It rained the entire day on Friday, and by Saturday morning, it didn’t look any better. But Rita’s mom prayed extra hard to Rita’s father, who had passed away many years ago, to watch over his daughter and keep the rain away, and her prayers came true. The sun came out in the afternoon, and the wedding was amazing. Even I had a hard time keeping dry eyes through the whole ceremony. And now I can say, it was one of the best weddings I have ever done. I know I say that after every one, but this one was so special, yet I can’t really elaborate why I feel that way. Perhaps it was the people. Perhaps it was Mexico. I’m not really sure, but something very magical happened when 90 Russians converged on Mexico. It was a marriage in more than 1 way, for sure.

Sunday morning, Faina and I had our last breakfast together. We sat in the sun at the beach, and got ready to say our goodbyes. I said goodbye to Rita and Dan, Yelena (Rita’s sister), Faina, Esther, and all of my other newfound Russian friends. I will never forget this experience. It made me a richer person, and certainly not because of the financial gain. I am a better person for having met this group of people. They made me remember that my problems are insignificant, compared to the challenges they have met in life. They reminded me that even though people are different, we can still put aside our differences, and find ways of communicating in loving ways, across cultures. They reminded me it is fun to learn about and meet people from other cultures, that there is a whole big world out there, aside from my own.

They opened the world up to me, and I’m so happy to have met Russia in Mexico. Dan and Rita – I wish you the best life has to offer, because you deserve it. You are an amazingly beautiful couple, and I thank you for everything you brought to my life. Make sure you let me know when the first baby is coming!